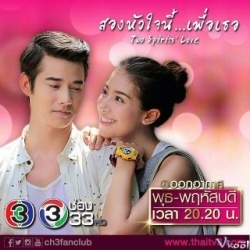 The title speaks to Mario’s character who’s a businessman and through an accident caused by the villains, he loses his memory. Mint happens to be at the right place and right time and saves Mario. Due to the amnesia, Mario becomes someone unlike his former self, and we’ll get to see how he plays two different personalities while trying to figure out his real self, and come to term with this new revelation. Thus the ‘two spirits’ love.’ Sounds fun!