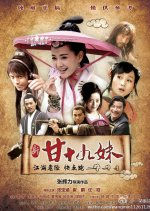 Near the end of the Yuan Dynasty and the beginning of the Ming Dynasty, a clash between Shui Hong Shao and Wulin Qi Xiu results in her face being disfigured and all of her martial arts abilities being lost. Sixteen years later, she has taken 19th Sister Gan under her wings and trained her to become a highly-skilled martial artist, who is beautiful and powerful. One by one, they destroy all the sects under Wulin Qi Xiu for the sake of vengeance and to cause an upheaval in jianghu. Yin Ping Jian escapes and after multiple encounters with 19th Sister Gan he realizes that she is the person he has been looking for for so long.